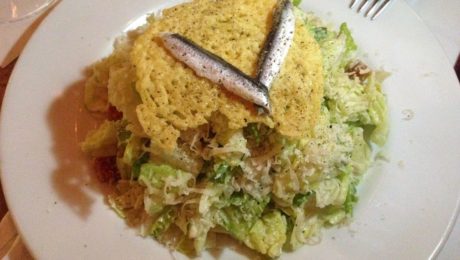 The fine north shore Italian restaurant has expanded, again. And again, I look back on a fine meal that brought stiff competition for the highlight reel. Yes, chefs and co-owners David and Torre Solazzo are typically at their best in the spring-summer, when the local produce hits a peak. But on some nights, the heart desires nothing so much as a perfect Caesar salad, and this was one of those nights. 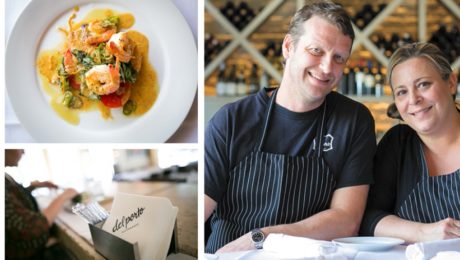 David Solazzo is a metaphorical melon thumper who indulges his discernment at the Covington Farmers Market every Saturday morning—systematically, rain or shine.

“The dude is here super early, like when we open, to get the very best, the choice pick, of the meats and vegetables from us farmers,” said Nick “Man of the Land” Usner, an artisan, organic grower from Waldheim, Louisiana. “His menu at Del Porto is directly reflective of what we are selling. To some extent he drives what I plant. He just blew my mind when he started grabbing up all of these weird heirloom squashes and tomatoes so I planted more. He goes through more fennel than any chef I have ever known. And my figs? Dave just can’t get enough. He’s an amazing chef, but he knows the best ingredients make the best food.

“And Torre? While Dave is methodical and exacting, Torre is a creative genius who will step out on a limb and do something weird, daring, and creative; and it works. They are an amazing pair, and they are the absolute bedrock of farm-fresh, local dining in this community.”

Case in point: the unique soup Torre concocts each summer from Nick’s kaleidoscopic varieties of fresh okra. While the common inclination is to marry the vegetable with tomatoes or simply pickle it and move on, Torre grills it and sweats it down with summer corn, basil, oregano, rich chicken stock, and prosciutto before she whirls it into a silken purée. The result is the essence of the season, beautifully and simply enhanced and presented in a graceful china bowl.

Where many might rest easy and just dial it in after thirteen years as successful chefs and restaurateurs, this husband-and-wife team always seems freshly energized. “I went to CIA (The Culinary Institute of America) in Hyde Park,” said David, a 1998 graduate. “Then I worked at the Brasserie in Rochester before I moved to California. That’s where I met Torre.” His future bride, a 1999 graduate of the California Culinary Academy in San Francisco, left her post at George Lucas’ Skywalker Ranch in Marin, California, to take a position at Tra Vigne in the Napa Valley, where she met David and where they discovered a mutual passion for rustic Italian cooking. They married in Torre’s native New Orleans in 2000 and, while working under Chef Gerard Maras at Artesia in Abita Springs, they determined the Northshore to be the ideal setting for the restaurant they wanted to open.

“I grew up in suburbia,” David said. “But it did not have the small-town feel that Covington still does. There is a uniqueness in this small town, and it is rewarding to me that small towns are also able to have first-class restaurants.”

Del Porto Ristorante began in 2002 as a ten-table affair just down the block from its current home at the corner of East Boston and New Hampshire streets in Covington. To house the restaurant, the couple applied adaptive reuse to Mood Indigo, a head shop. Usner recalls the miniscule restaurant fondly. “They painted the walls white to try cover up the dancing skeletons—à la Grateful Dead—on the walls. But if the sun was shining juuust soooo, you could still see the skeletons. I loved that place.”

The chefs thrived in their colorful locale where they eschewed the region’s popular Southern Italian fare and rich, tomato-based sauces in favor of a contemporary approach to Italian cooking with a focus on house-made, seasonal, farm-driven ingredients, grilled meats and seafood, and ethereal billows of fresh pasta. Less than a year after its opening, New Orleans Magazine named Del Porto “Best New Restaurant.”

In 2007, the Solazzos decamped for larger digs on the corner. Not just kitchen wizards, the Solazzos have the atmosphere game down, too. There’s no slip-shod paint job at the new location. The walls are lacquered in a luscious cream glaze to offset the eclectic collection of contemporary art. Whisper-thin glassware and vases of market flowers glisten flawlessly in the sunlight that flows in through banks of picture windows. By night, soft, rich ambient light invites you to linger and makes ladies look beautiful. Since 2007, The Times-Picayune has consistently named Del Porto one of the New Orleans area’s “Top Ten Restaurants,” and it holds a spot on the Zagat Survey’s “Top Rated” list. The James Beard Foundation named them semi-finalists for “Best Chef South” for the years 2009, 2010, and 2011; and they were jointly named “Culinary Artist of the Year” by the St. Tammany Parish president in 2011.

Torre hails from a family with a history of diabetes, and, not long ago, she was diagnosed as pre-diabetic. The diagnosis has driven Torre to obsessively educate herself on the diet and lifestyle changes that will harness the progression of her condition. Her next step is to begin educating others through speaking and writing. “Fresh, healthy food can be absolutely delicious,” she said. “This is the food we serve at Del Porto.”

A tasteful 2014 expansion of the historic property has grown the restaurant by forty seats and tripled the size of the kitchen, effectively reinvigorating the Solazzos yet again while, conversely, driving them to reevaluate their business and their priorities. “The expansion necessitated hiring more people, and the people who applied were the top of their class,” Torre said. “We’re talking really serious, seasoned veterans of some of the best restaurants in the country. So, weirdly, growing as we just did is allowing us to share some of the load with really serious pros so we can focus on our passions, our family, and our menu.”